The profile orientation of the Department is related to the problems of legal protection of natural resources and the environment in general. The coordination of actions of various state and non-state institutions, as well as interstate cooperation is of special importance for their solution, as these problems are not limited to the borders of the state and their effective solution requires the efforts of all.

Membership in the Academy allows lecturers to share the results of their research with scientists around the world, share and improve methods of teaching environmental law, participate in joint research and initiatives aimed at solving the most global environmental problems through law.

Particularly active work in this direction was conducted by Associate Professor Svitlana Romanko, who was a member of the Board of the Academy.

Associate Professor Svitlana Romanko constantly participated in the work of the International Colloquiums of the Academy with the publication of materials. 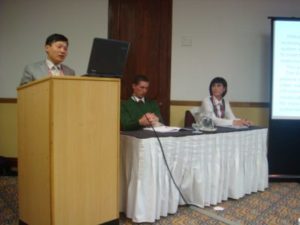 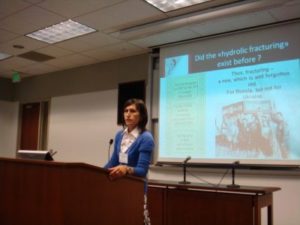 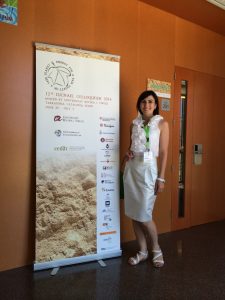 Today an active work in this way continues Associate Professor Lesia Danyliuk, who always provides the monitoring of the international educational, scientific and practical projects with aim to participate in them lecturers of the Department and students of the Institute.

On June 1, 2021 Lecturer Lesia Danyliuk took part in International Colloquium of the Academy «The future of Environmental Law: Ambition and Reality» (online) Groningen (Netherlands) and presented the topic «The Municipal Waste Management in Ukraine in the Context of European Integration: Main Problems and Basic Ways to Solve Them». 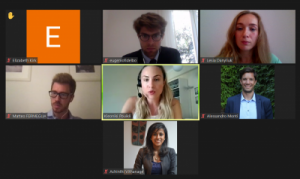 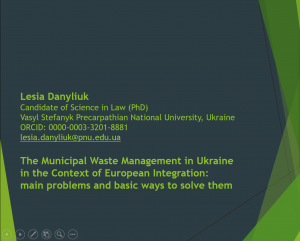 Lecturers of the department were participants in the international exchange program «Open World», organized by the US Embassy in Ukraine with the assistance and financial support of the US Congress. The main goal of the Open World program is to strengthen mutual understanding and cooperation between Ukraine and the United States by providing opportunities for Ukrainian leaders in various fields to meet with their American counterparts and share experiences and ideas on the most important issues for both sides.

Professor Nadiia Kobetska was in the United States under the program «Open World» as part of a delegation of Ukrainian lawyers from 14 to 24 September, 2011 in Chicago. 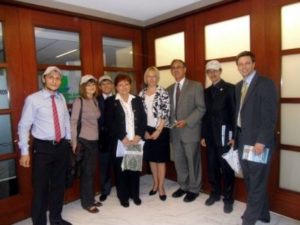 The contacts established during the meeting facilitated the establishment of theEducational and Scientific Law Institute cooperation with educational and other US institutions on various activities, in particular, launched a program for the exchange of scientific products with the Library of Congress in Washington.

Associate Professor Svitlana Romanko became a participant in the same program in the direction of «Rule of Law» from 18 to 29 September, 2013. 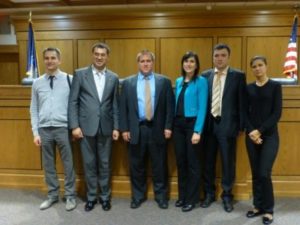 As a result of visits to US government agencies, law firms and educational institutions, knowledge of the US legal system was formed, business relations were established with the administration of Sunny Law School of the State University of New York (Buffalo, New York), in particular with a professor of environmental law. Erol Medinger University and Rochester College, New York. There was also an opportunity to visit and learn about the work of the state police department and the court for monitoring the implementation of parole in Rochester (New York), as well as the work of a public organization that unites practicing lawyers.

Associate Professor Svitlana Romanko from 12 to 16 November, 2012 and Professor Nadiia Kobetska from 24 to 28 July, 2013 as part of the delegation from Ukraine participated in a special course on law enforcement and criminal prosecution of crimes against the environment in Budapest (Hungary) on the basis of the International Law Academy (ILEA) for full financial and organizational support from the United States Environmental Protection Agency (U.S.EnvironmentalProtectionAgency), the US Department of Justice, the US Department of State, and the US Embassy in Ukraine. Representatives of other countries also took part in the course: Georgia and Romania, Moldova and Bulgaria. During the course, participants received in-depth information on ways to address issues arising from the criminal prosecution of crimes against the environment, the available tools and instruments for the effective conduct of such cases, shared experiences of their countries. 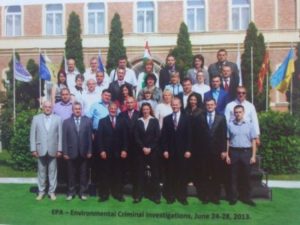 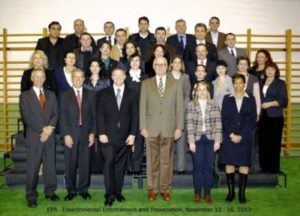 Professor Nadiia Kobetska and Associate Professor Svitlana Romanko participated in the training course «Illegal logging and forestry crimes», which took place with the full organizational and financial support of the US Embassy in Ukraine in the period from September 28 to October 2, 2015 at the International Law Enforcement Academy (ILEA ) in Budapest (Hungary). As a result of the course, business relations were established with the Regional Environmental Center and the International Law Enforcement Academy, new areas of cooperation with both the above-mentioned international institutions and with the law enforcement agencies of Ukraine were outlined. 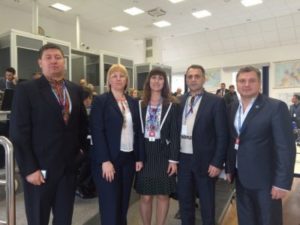 During January–June 2016, Assistant of the Department Lesia Danyliuk was a student of the online course on international environmental law, developed by lawyers and ecologists of ICO «Environment-People-Law». The program of the course included eight modules, which provided for the study on a special platform of the most pressing environmental issues in a transnational context.

The result of the successful completion of the course was the invitation of Lesia Danyliuk to participate in the international summer school «International and comparative environmental law», organized by ICO «Environment-People-Law» and the Law Institute of Vasyl Stefanyk Precarpathian National University (Zhdenievo, Volovets district, Zakarpa region, June 4–7, 2016). Well-known lawyers and ecologists from the USA, Great Britain, Moldova and other countries took part in the summer school. 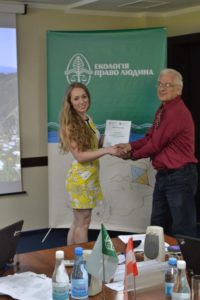 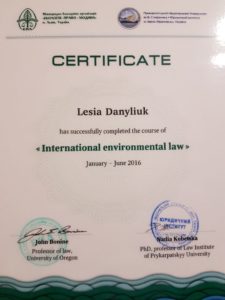 In 2019, Professor Nadiia Kobetska became a laureate of the Ivan Vyhovsky Award and received the right to undergo a research internship at two Polish universities (Jagiellonian University (Krakow) and Rzeszów University (Rzeszów)).

From October 1 to November 30, 2019 Professor Nadiia Kobetska passed the first stage of the internship within the internship program «Nagroda im. Iwana Wyhowskiego» at the Jagiellonian University (Krakow). The internship took place directly on the basis of the Department of Environmental Law, Faculty of Law and Administration. The scientific consultant was the head of the relevant department, deputy dean of the faculty Professor Barbara Iwańska (Professor Barbara Iwańska). During the internship there was an opportunity to listen to weekly lectures on the course «Environmental Law in Poland and in the EU», conducted by Professor Barbara Ivanska, and attend practical classes. At the seminar held for masters in environmental law, Professor Nadiya Kobetska presented the report: «Peculiarities of legal regulation of the use of animals in entertainment events in Ukraine» and took part in a discussion on the comparison of relevant standards in Ukraine and Poland. The result of research work were prepared scientific publications, in particular, scientific articles «Features of the legal regime of national parks under the laws of the Republic of Poland», «Categories «environment» and «nature» in the system of environmental law of the Republic of Poland».

From April 1 to May 31, 2021 Professor Nadiia Kobetska took part in the second stage of the internship within the framework of the program «Nagroda im. Iwana Wyhowskiego» at the University of Rzeszów (Rzeszów). 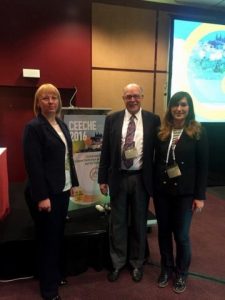 On October 20–21, 2016, Assistant of the Department Lesia Danyliuk took part in the International Conference «Evolution of Private Law – New Approach», which took place in Katowice (Republic of Poland), on the basis of the Faculty of Law and Administration of the University of Silesia. The topic of the speech was «Contractualregulationofusinghunting lands». 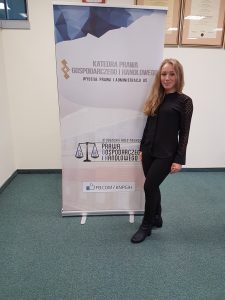 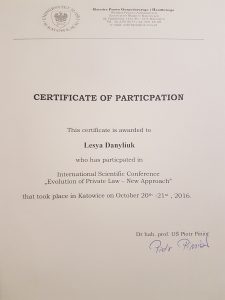 On October 17, 2019 an international conference on «National, European, International Standards of Legal Protection of Animals» was held on the basis of the Marie Curie-Skłodowska University in Lublin (Republic of Poland). Representatives of the Department wereinvited to participate in the conference– Professor Nadiia Kobetska and Lecturer Lesia Danyliuk. Professor Nadiia Kobetskawas included in the scientific committee of the Conference and spoke at the plenary session with a report on «The use of animals in entertainment events: the requirements of Ukrainian legislation and the practice of their implementation». 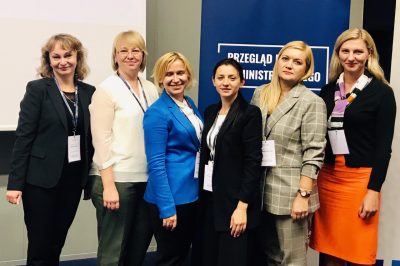 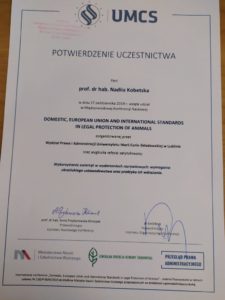 On March 31, 2021 Professor Nadiia Kobetska and Lecturer Lesia Danyliuk participated in international online conference «Legal Aspects of Humanitarian Protection of Animals» in Lublin (Poland Republic) and presented the topic «Implementation of the Provisions of the European Convention for the Protection of Pet Animals into Ukrainian legislation: Some Theoretical and Applied Aspects». 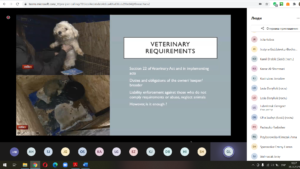 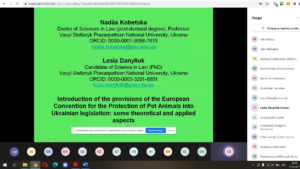 – November 7, 2012 in cooperation with the International Academy of Environmental Law of the International Union for Conservation of Nature was held a meeting between professors and students to Matthew Michael Sura, who is a lawyer and an expert, Professor at the University of Colorado. The main aim was to discuss the positive and negative aspects of shale gas development (in particular in terms of concrete region), as well as evaluation of public opinion and their awareness in this regard. There was a list of risks discussed: the lack of adequate safeguards to protect the rights of landowners and people of the region in general; potential negative impact on the many recreational areas and national reserves of Carpathians; the danger of earthquakes and landslides; the problem of providing a large mass of pure water for hydraulic fracturing and cleaning the reverse water; absence of a fixed list of chemicals that allowed to use used in hydraulic fracturing; chemicals possible penetration from water into the soil, surface and groundwater, air pollution and others. 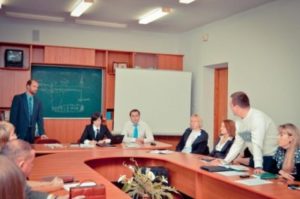 – On December 10, 2013 has been organized the meeting with Professor John Bonine from University of Oregon (USA), the founder of one of the first legal clinic in the United States and the first environmental law clinic (1978), a respected researcher of human rights, particularly environmental. Professor gave a lecture to students to discuss issues of environmental law and issues of constitutional rights, including the right to freedom of assembly. 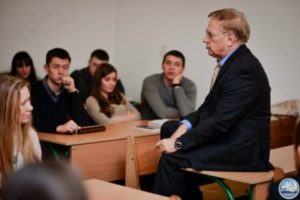 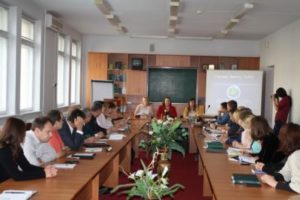 – On April 12, 2018 in the framework of international cooperation, took place a meeting of teachers of the Department with Hasrat Arizhemend – Doctor of Philosophy, Faculty of Law and University Quebec (Canada), Senior Research Fellow, McGill University Center for International Law on Sustainable Development, Winner of the UNESCO Award for Educational Innovation (Asia and PacificRegion).

During the meeting, the issues of participation of teachers of the department in joint scientific and educational projects related to the management of natural resources, citizens’ rights to agricultural land and others were discussed.

The invited guest also gave a lecture for students of the Educational and Scientific Law Institute on «Legal regulation of access to the use of genetic resources (on the example of India, Belarus, Brazil, the European Union, Ukraine)».

The lecture presented current issues of access to biological resources, the peculiarities of their use in the international context, the importance of the Cartagena and Nagoya Protocols to the Convention on Biological Diversity in the process of regulating access to genetic resources. 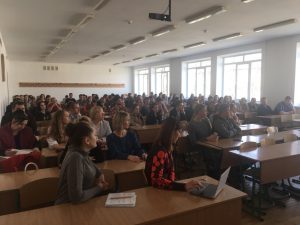 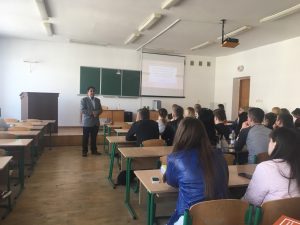 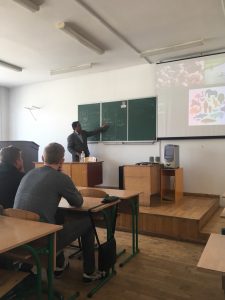 Also the results of coordination by Lecturer Lesia Danyliuk of the corresponding way of the international cooperation of the Department in 2020-2021 academic year are:

1) participation of Lecturer Lesia Danyliuk in four online seminars, which were held by the Centre for Environmental Law and Governance of the University of Strathclyde (Glasgow, Great Britain);

2) submission by Lecturer Lesia Danyliuk the application for participation in online Early Career Workshop «Critical Perspectives on Global Law and the Environment», which was held by the School of Law and the Human Rights Centre of the University of Essex (Colchester, Great Britain) and preparation of the abstract on the topic «Environmental Information Relations in International, European and Ukrainian Law: Legal Regulation and Practical Aspects of Realization»;

3) submission by Professor Nadiia Kobetska and Lecturer Lesia Danyliuk the application for participation in 7th Frontiers in Environmental Law Colloquium (online) (Adelaide, Australia) and preparation of the abstract on the topic «Medical Waste and COVID-19 in Ukraine: Legal Aspects of Management and Main Practical Problems»;

4) participation of students of the Institute in Global Youth Summit «One Nature, One Future». 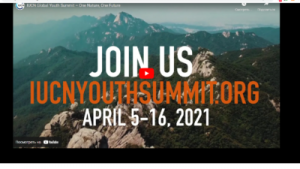 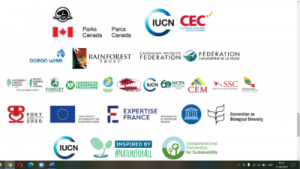 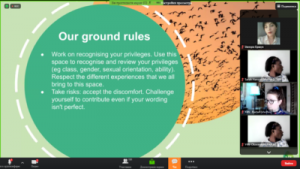